The AFO has many variations and out of belief and anecdotal thinking and on occasion necessity, other styles were made.  They came in the form of tall acrylic spiral IRM design, to exoskeletal bi and tri-planar hinged and locked hinged variations to floor reaction designs with Newtonian physics in mind.

As thermoplastics came into existence and evolved, the double upright metal AFO attached to a high top orthopedic shoe became a dinosaur and found to be of little functional value.

The array of thermoplastics can now be selected by the orthotist, PT or physician depending on physical properties needed for optimal AFO function or purpose.

Variations and design steeped in tradition as short leg braces with the primary intent to provide the young cerebral palsy child  with postural stability. Mobility was not necessarily the intent or purpose; holding the child upright was a goal.  It was incorrectly presumed that the patient was too weak, so an exoskeletal frame was designed to help maintain vertical with little or no active muscle effort on the part of the child.

Materials used in the fabrication have evolved as thermoplastics became available for better fit and contour. Still, tradition in design is all too common, most often with unacceptable outcome or anticipated benefits in function.
Assumption being made that 90° tibial-foot angle was “neutral.” Right angles must be “neutral” and therefore “normal” right? Correct if you are building a house but not of benefit for a standing and walking child. Because the tibia does not sit at foot center or midpoint, right angles (90 degrees) doesn’t make sense posturally or functionally. Also since AFOs are worn with foot wear, the shoe/sneaker design is of paramount importance in ‘setting’ the tibial-floor angle

Trimlines, not often considered for the child who is starting to walk or take steps and almost never considered in the ambulatory child where trimlines can be a major obstacle or can encourage more efficient reciprocal gait with improved energy expenditure.

Long toe plates crossing the MPJs will block the mechanism for shortening the foot lever or length and result in proximal, undesired compensations along the sagittal and/or transverse planes where freedom of mobility is imperative if the orthosis is not to be a barrier for forward walking. 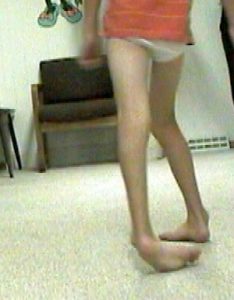 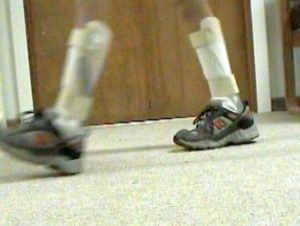 extensions and thermoplastic material selection is not a “black and white” issue without consideration of what the orthosis is to accomplish.

Once it is determined what the AFO is to offer, the total child must be evaluated in order to see if it is possible to fabricate and fit an uncompromising outcome. All too often the assessment is completed and the child’s lower leg and foot wrapped in plaster to obtain an accurate and representative model of an uncompensated leg and foot. The positive plaster model is then created. Much too often and based on tradition, the plantar contours of the model are radically altered or wiped out during cast preparation.

For reasons of tradition, the functional benefit of the AFO is significantly compromised as a result of cast modifications. The AFO is only as good as the cast over which the thermoplastic is formed. Distort the cast and the anticipated benefit is lost as far as function. Some central fabrication facilities modify the cast without ever having seen the child, simply to sacrifice function for possible discomfort if something was missed during the anatomical and functional evaluation.

Some casts are purposefully distorted so the AFO can ‘stand upright’ on table top without falling to the sides. Another misconception that the AFO must be stable when standing alone. Clearly a typical child does not stand on their feet like this so why do we expect that a child who is in need of an AFO should stand atypically.

Generally speaking, solid ankle orthoses (SAFO) are functionally more efficient and beneficial than articulated or hinged AFOs through standing and gait activities. This will be looked at in greater detail in the section on Hinged AFOs.
Greatest error in AFO design is “static thinking.” The design that encourages a child’s movement today should and will change as their abilities and skills change.
“STABILITY” is is the foe of Mobility. All too often the AFO ‘brace’ is fabricated for as much stability as possible; a barrier and obstacle l for the child.
Who “can make” a brace or AFO for a child is irrelevant. Who understands and knows what form, material and design of an orthosis determines if the child loses or benefits functionally. A generic Rx for ‘AFO’ says nothing and as a result, the child obtains nothing of functional benefit.

Design for Function NOT Stability

Ankle foot orthoses do not have to be “traditional” in design. They most often should not be designed for Stability; if we are presuming to use the orthoses for mobility.
Stability will promptly stop a body in motion. If the body does not stop there is certain to be undesired and unwanted compensations.

An AFO needs to “guide and direct” but not stop motion completely. It needs to guide the lower leg over the foot on all 3 body planes.

Address 2 out of 3 body planes and the 3rd will be controlled.
How much “motion” should the AFO permit when the child has limited “control” over the full and combined range from hip-knee-ankle-MPJ? If too much range is permitted, the result is poor control and falling.          Too little range and we risk compensations.

Biplanar or triplanar exoskeletal “hinged” AFOs presumes the child has FULL control over hip-knee-ankle linkages while in motion. If that is the case, it is doubtful they require an AFO in the first place.

An “exoskeletal” hinge (or ankle joint hinge)  is not needed.  In fact, it would be problematic without adequate control of the forward rotating tibia.  Anecdotally it is “felt” that a SAFO (Solid Ankle) will hinder, stop and interfere with play and activity.  Apparently not,  as seen in this sequence of photos taken from video while catching and rolling a ball.

Is there any scientific or functional reason to avoid hinged AFOs?

The Science is there but often ignored or complex to understand so we revert to traditional, anecdotal thinking that is often incorrect.  More problems are created than solved.

The studies and publications have been printed in peer review literature and orthopedic textbooks.  We can choose to read them or pretend they were never printed.

Do I avoid any and all hinged AFOs?  Not at all. I do use them, however use with caution, know the child’s abilities and for the right child. To simple offer “dorsiflexion” is no reason at all! To offer dorsiflexion where currently no flexion exists anatomically due to high degree of spasticity, rigidity or contracture is doomed to fail. No, dorsiflexion is NOT a requirement of stepping and walking independently. How do kids in fiberglass walking casts (not fracture casts) walk in a heel to toe fashion if ankle joint dorsiflexion is a requirement? Know the goal of the AFO design and know the child’s ability to control a forward falling lower leg or tibia over the weight bearing foot. Essentially, do no harm.

Ankle Foot Orthoses or AFOs are needed to primarily control dynamic deformity or malposition of the lower leg and foot that is present in swing phase of stepping or walking.
They are also used to offer guided assist in control of the leg over the foot in stance phase or during transitions of movement.

AFOs in cerebral palsy should not be used to “hold” the child up as this would be counterproductive to movement development and gait.

However, hinged AFOs are used extensively and most often for the wrong reasons. In more cases than not, they will do more harm than good.

With an elementary understanding of gait and development of gait in children, the reasons that hinged AFOs are poor choices for diplegic and quadriplegic children become clear. First, soleus contraction is blocked by the 90 degree Plantarflexion stop. However, in motion, the passive hinged system encourages prolonged and uncontrolled stretch with traction on the soleus as the center of gravity moves forward in gait. Studies have clearly shown and demonstrated that persistent traction and stretch of a muscle in motion will cause sacromere addition within that muscle leading to overgrowth of the muscle. Over time, as it becomes longer the soleus has less and less ability tor estrain the forward moving and falling shank or tibia during walking. The 2nd rocker of gait is lost and the child begins to walk with increasing knee flexion as a result. The PF/KF couple is then lost or severely reduced while enegy expense becomes greater as a direct result. Remember that the gastrocnemius [extending above the knee joint] typically assists the soleus for “push off or toe off” in terminal stance. However the gastrocnemius also becomes limited by the plantarflexion ankle stop of the hinged AFO. Yet the gastrocnemius, with its attachment above the knee can and does react at the knee rather than ankle joint in the hinged system. As a result, the gastrocnemius is transformed by the hinged system and ankle block into becoming a knee flexion assist with little – no benefit at the ankle joint. The PF/KE coupling is considerably impaired. Hamstring contractures typically result and a surgical solution for these contractures become an enigma in light of the lost PT/KE couple.

Evolution and development of floor reaction braces resulted to address the needed hamstring surgeries and afterward brace or hold the shank/tibia/leg upright. This now became a passive solution to stepping rather than walking.